On December 19, 2009, a few friends and I attended the first ever Dickens Faire in Virginia City, NV. There were only about 10 booths, but all the shops up and down main street were decorated for Christmas, there were other people dressed up, and there were carolers, etc. Oh, and we got a 10% discount at the store because we were dressed up. My husband and I went up before everyone else and wandered through the town.

We had our picture taken many many times by the tourist. It was actually quite amusing to watch people try to take our picture on the sly. Yes, people, if I am dressed up, I expect that you all will want to take my picture. It's ok. You don't even need to ask. 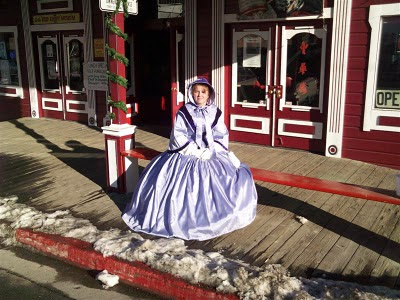 Me on the streets of historic Virginia City, NV
Since this was a Dickens Faire, all of us are dressed in 1850's and 1860's
Put this picture in sepia tones, and it could have actually been taken in the 1860's. 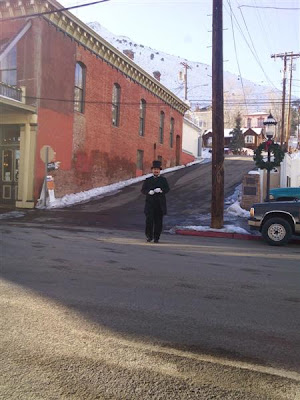 My husband, Joe, on the streets of Virginia City. 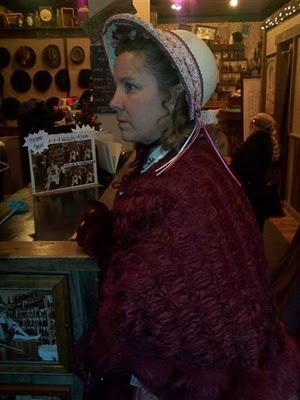 My sis-in-law's mom, Sami and her family joined us before the ball. She is wearing my very first historical outfit. 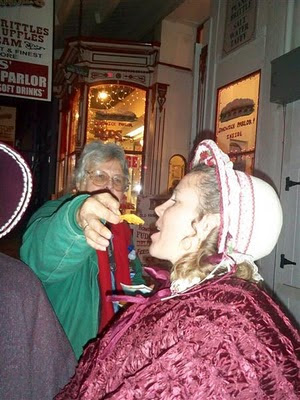 Sami's mom, Sue had the honors of feeding nachos to those who were wearing gloves 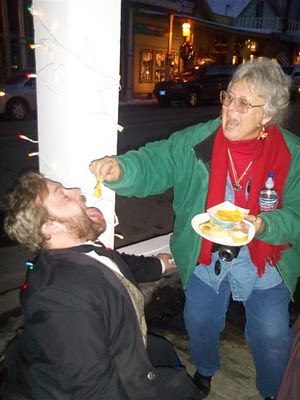 My brother, Josh, getting fed by his grandma-in-law 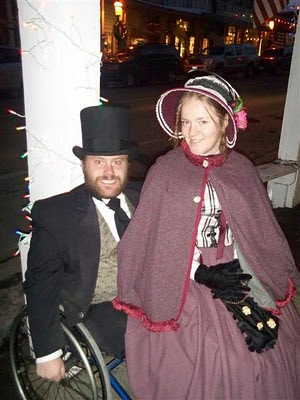 Josh and his wife, Beth, who happens to be almost the exact size as my mom, so Beth gets to wear my mom's costumes a lot. 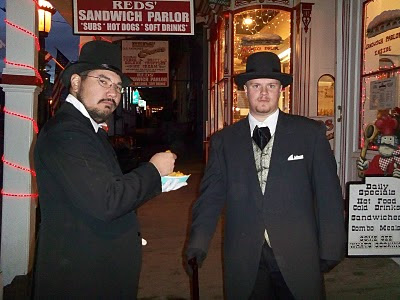 My husband, Joe, and Aaron (who is Beth's brother) 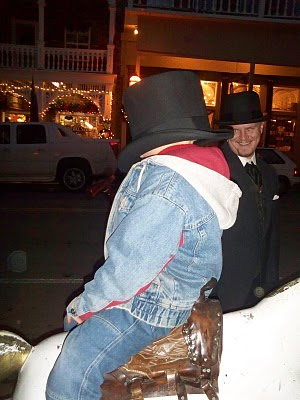 Ahh, the headless horseman! This is Beth's youngest brother. He went home with his grandma when the rest of us went on to the ball. 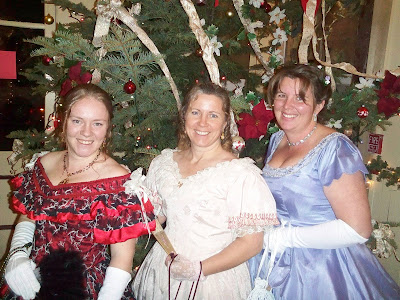 Voila! La transformation. We are now ready for the ball.
Beth, Sami, and Me 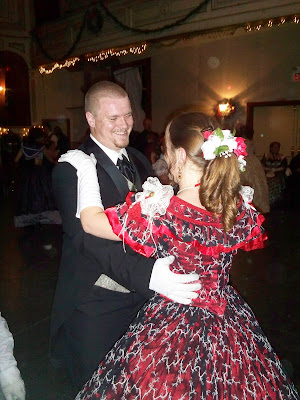 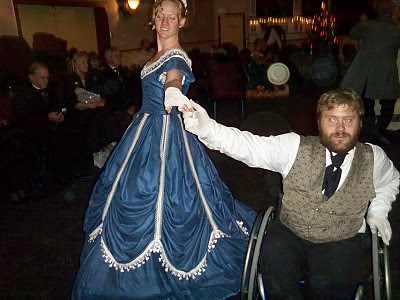 We were joined by three other people for the ball. This is Danae dancing with Josh. 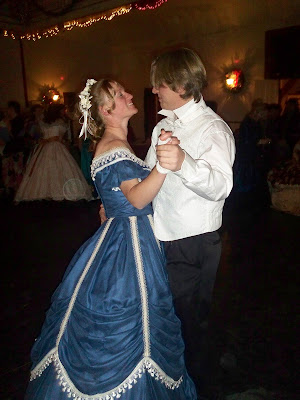 Danae and her boyfriend, Nick. This is his second ball. 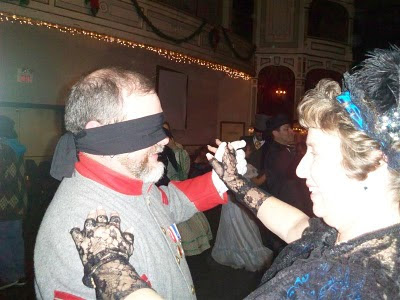 I don't know these people, but yes, he is dancing blindfolded. During this dance, all the men were blindfolded and the partners would dance. Then, when a whistle was blown, the ladies would leave the men and find a new partner. It was quite hilarious to watch. 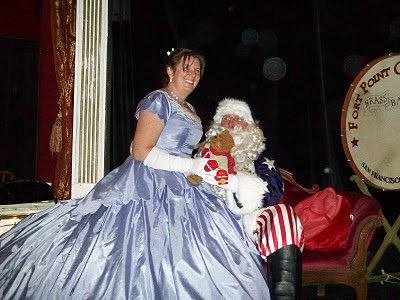 Saint Nicholas paid us a visit during the course of the evening. Mainly ladies went up to say hello. 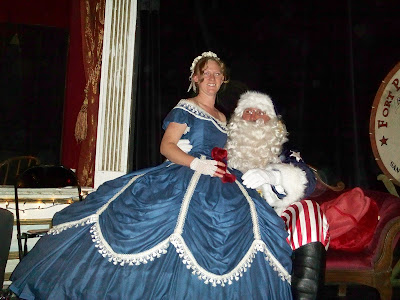 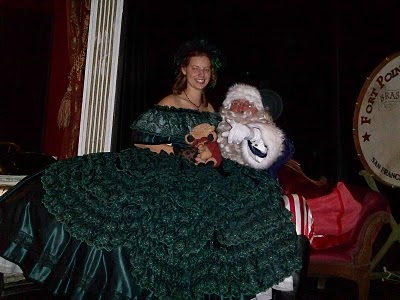 This is crystal. She was the last of our group. The dress she's wearing is called the peacock dress. It is the first time in years that anyone has worn it. 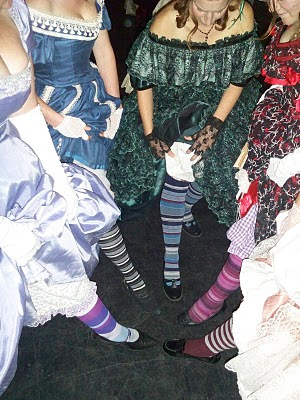 The Secret Sisterhood of the Stripe-ed Sock-eds
Is tradition. Other than that, you don't need to know. I don't think you'd understand even if I did tell you. 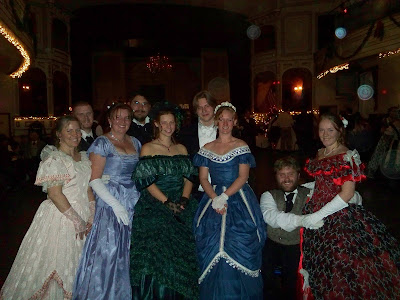 Our whole party. There were nine of us.
But for the ball as a whole, there were over 200 people crammed into the Piper's Opera house in Virginia City. It was quite a crush until people started leaving. 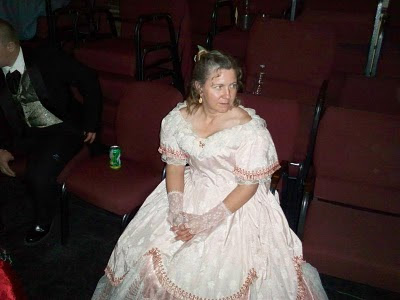 Lovely Sami taking a break from dancing. I am proud to say that our girls sat our very few dances during this ball.

We were graced by the presence of President and Mrs. Lincoln. President Lincoln gave a short speech welcoming us to the ball. 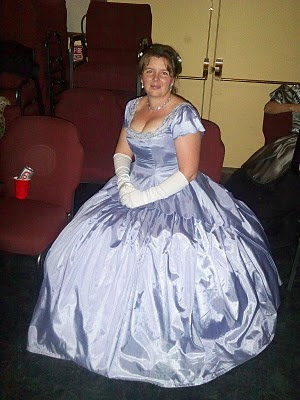 Time for a time-out. All that dancing is tiring. 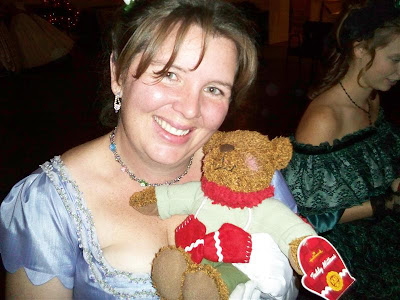 A souvenir from Santa to take home to my four year old daughter.

It was a wonderful day in beautiful Virginia City. I look forward to next year when hopefully the Faire itself will be larger. The ball, however, cannot get any larger. As I mentioned before, it was packed! But it cleared out fairly quickly, so it turned out great. I am glad that it was a sold out event since the money is for the Opera House.